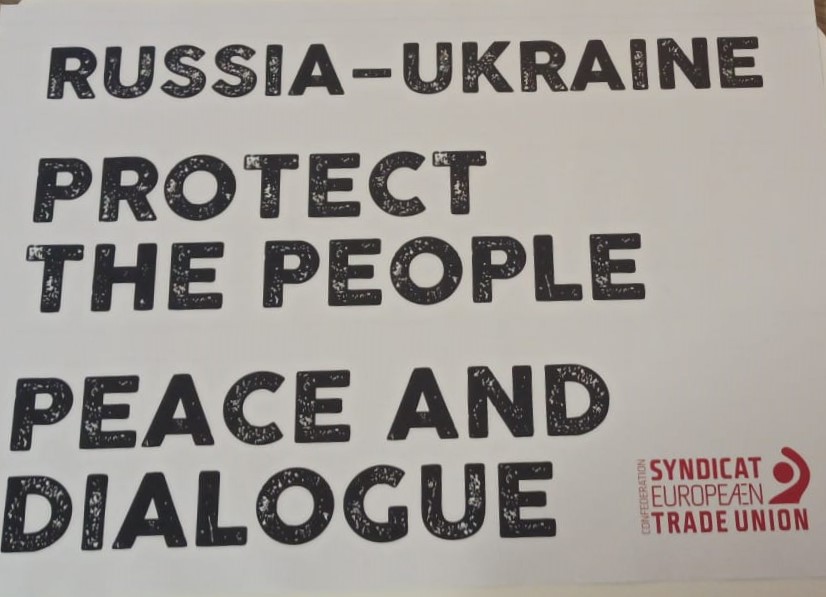 The ITUC and the ETUC call for an immediate end to hostilities and conflict in eastern Ukraine, and good-faith negotiations to resolve the crisis in the interests of people.

UN Secretary General António Guterres has described the decision by the Russian Presidency to give recognition to two separatist regions as inconsistent with the UN Charter and a violation of territorial integrity. He has called for peaceful settlement of the conflict in eastern Ukraine, in accordance with the Minsk Agreements, as endorsed by UN Security Council in resolution 2202 adopted in 2015. The Organisation for Security and Cooperation in Europe has also issued a condemnation.

ITUC General Secretary Sharan Burrow said “Many lives have been lost and people have been suffering for seven years, due to the failure to implement the Minsk Agreements. Hundreds more ceasefire violations have taken place in recent weeks as the dispute has been artificially fueled. Instead of building bridges for peace, huge amounts have been spent on armaments and the military, and aggressive rhetoric has caused further instability. The ongoing conflict has had dramatic consequences for the economies of both Russia and Ukraine as well as elsewhere in Europe. The risk of escalating conflict, with devastating consequences, is real and will continue to be so until there is serious dialogue that deals with the root causes of the dispute”.

Luca Visentini, General Secretary of the ETUC and the ITUC Pan-European Regional Council PERC, said “The Presidents of the European Commission and the European Council, and the High Representative of the EU, have made strong statements in support of Ukraine’s territorial integrity and the Minsk Agreements, similar to the UN Secretary General. All political leaders must have the courage to avoid war, seek compromise and respect agreements, and the wisdom to build sustainable economies that work for people and provide the essential basis for common security. The collapse of common security measures, such as the INF Treaty and the Treaty on Open Skies, which provided channels for verification and dialogue, is linked to an overall weakening of the provisions of the Helsinki Accords, which have helped ensure peace for nearly 50 years. There is now a real prospect that this vital framework will completely unravel and that militarisation in Europe, which has already been underway, will escalate. We call for urgent steps to bring together all the relevant political leaders to build a common security framework just as was initiated in Helsinki. The world needs a new social contract, not more conflict. We need investment in people and jobs, in peace and stability.”