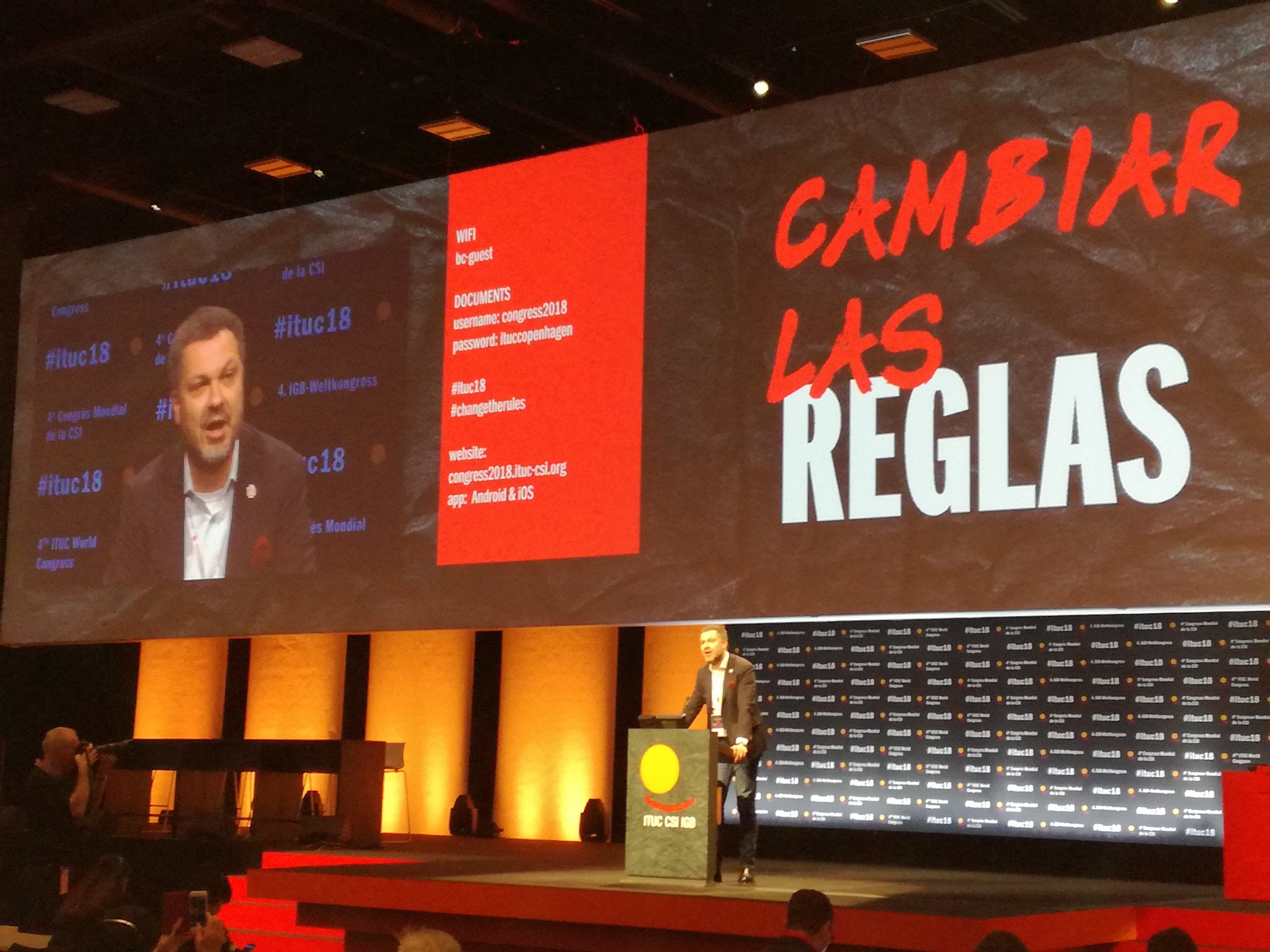 Let me thank our Danish colleagues, LO and FTF, Lizette and Bente, for the fantastic welcome they gave us here in Copenhagen.

I really admire you for the way you have defended and implemented the Danish model, based on social dialogue and collective bargaining.

And also for having been able to finalise a merge between your unions, that will provide Danish workers with an even more united and stronger trade union movement.

We in Europe are facing the greatest attacks on democracy since World War 2.

Far right, nationalistic and xenophobic forces are putting our values and our social model at risk.

This is an unprecedented challenge for us, a challenge we share with several of you in different parts of the world.

Democracy is at risk in Europe, but also in Latin America, in the United States, in Africa and in Asia Pacific.

It is the responsibility of trade unions to defend democracy against fascism, autoritarism and xenophobia, we need to stand together and to reinforce our cooperation.

We need to build a trade union alliance for democracy!

But democracy cannot be a formality.

There is no political democracy without economic and social democracy.

There is no real democracy without democracy at the workplace!

We are told by the far right that we have a migration emergency, that migrants come to our countries to bring criminality and steal our jobs.

And that they, the far right, are the only ones able to defend and protect us from this invasion, possibly by sacrifying our liberties and rights in exchange for security.

Migrants are workers like we are, they are exploited and played against us, they are not our enemy.

We know what is really behind the crisis of democracy, the false migration emergency, behind people’s anger and fears.

And the cause of all this is the neoliberal model, that has been imposed  on us for decades, during the globalisation era and during the world economic crisis.

That neoliberal model didn’t create either growth nor jobs, but only speculation and profits, profits that were never shared with working people.

That’s why we need a global trade union alliance for economic and social democracy!

We need to build together an alternative economic model, based on sustainable  growth, on just transitions, on investment and wealth redistribution, on fair trade and globalisation.

We need an economic democracy where nobody is left behind.

And we need a social democracy, with strong social dialogue, collective bargaining and minimum wages, to ensure living wages and fair working conditions for all.

A social democracy were adequate social protection covers all workers regardless of their working status, where precarious jobs are turned into stable ones, where women, youth and migrants are not discriminated and everybody can get equal pay and equal working conditions.

This is our mission, brothers and sisters!

The most successful trade unions, like the ones from the Nordic countries in Europe, can help the others with their example.

Global trade unions, as the ITUC, the GUFs, the ETUC, can support our colleagues in every country to strengthen their trade union power.

This is international trade union solidarity!

We all must continue improving our cooperation, and I can assure you that the European trade union movement is ready to work together with trade unions of the Americas, Africa and Asia Pacific to build a better world for working people.

Over the last years the ETUC has had a very positive cooperation with the ITUC and within the PERC.

I’m sure that this will continue in the next term.

I want to warmly congratulate both Sharan and Susanna.

The competition at this congress was not between two persons nor about personal issues.

It was a competition on content, on policy, on different visions of the movement, with real organisations, trade unionists and values that have mobilised.

This kind of competition deserves major respect, and I really want to thank Susanna and Sharan for having brought their values and visions to the discussion of this Congress.

Now it’s the time for unity, as Guy reminded us on Sunday.

It is the time to set up a unified team where everybody feels to be represented.

The time to work united, in full solidarity, building together a better future for  all workers in the world.

06.12.2018
Speech
In Trade
It is the responsibility of trade unions to defend democracy against fascism, autoritarism and xenophobia, we need to stand together and to reinforce our cooperation. We need to build a trade union alliance for democracy!
Print